Dr. Casarotti, senior researcher at the Eucentre Foundation since 2011, is head of the Emergency Support Department.
She received a Master of Science and a PhD in Earthquake Engineering jointly awarded by the Institute for Advanced Study of Pavia (IUSS) and the Università degli Studi di Pavia in 2004, after which spent about one year at the University of California San Diego as post-doctoral researcher.
Dr. Casarotti main scientific interests concern applied experimental research the field of earthquake engineering, dynamic response of RC structures, seismic isolation and dissipation devices and emergency technical response.
Particularly she dealt with linear and nonlinear static procedures for seismic design ad assessment of structures, static and dynamic analysis of RC structures, engineering seismology, experimental response and numerical modelling of isolation/dissipation devices, experimental data processing, inverse problems for structural characterization.
Since 2007 she is in charge of the scientific supervision of the tests carried out on the Bearing Tester System (BTS) lab facility of Eucentre.
Since 2009 she has been deeply involved in the emergency management and rapid response to earthquake disasters, both within the framework of pilot projects on the European Civil Protection Mechanism modules, national Civil Protection projects and in real disasters (Abruzzi-Aquila 2009, Emilia 2012 and Central Italy 2016), with technical coordination roles. 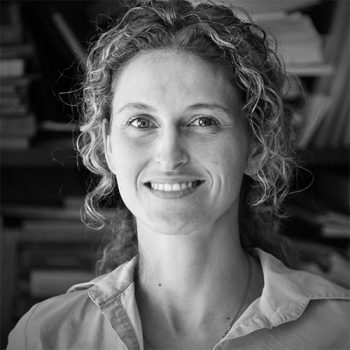