The video was made in the laboratories of the University of Pavia and Eucentre as part of the activities of scientific dissemination of the European project LIQUEFACT. It shows through an experiment the phenomenon of soil liquefaction induced by earthquakes and the consequences of this phenomenon on the building stock. The video shows a glass box filled with water-saturated sand placed on top of a shake table. Two small buildings are placed at the ground surface: the one on the left is founded on a slab while the one on the right is founded on piles. As the shake table starts vibrating, the pressure of the water in the sand gradually increases and this reduces the ability of the soil to carry the weight of the buildings. The soil starts behaving like a fluid. The consequences of the fluidification of the sand mostly affect the building founded on the slab which starts overturning. On the other hand, the building on the right is stable because it is founded on piles. It can be noticed at the end of the video a yellow plastic ball popping up at the ground surface due to water pressure after it has been buried beneath the sandy layer.

The design of the experimental test and its implementation was carried out with the fundamental contribution of Professor Alberto Pavese.

The video was edited by the communications staff of TREVI SpA, LIQUEFACT‘s industrial partner. 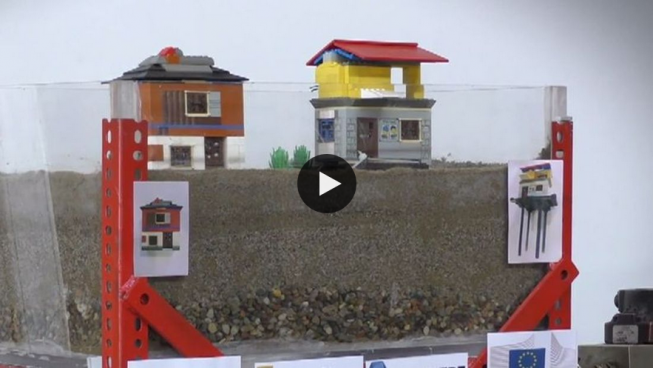